Hello Inhale the Heavy! This is Chvasta from Dead Register. Thank you for taking the time to read this, only 1 year and 2 months after I was initially asked to participate. I’m a terrible, late to the party, nearly-non-vinyl-owning slacker. I’ve sold most of my physical media over the years to fund things like: gas for the van, merch to sell, food, van tires, and undoubtedly some Taco Bell. I’ve owned many turntables over the years, and I’ve burned all of them out (worn out direct drive and fumbling belt drives). I digress…

The first record I ever bought with my own money was…
I bought a National Geographic magazine that had a square flexidisc 45 with the recorded sounds of humpback whales. IT RIPPED. I loved it as a kid. That, and the He-Man “Read along” records that came with the story book.

The record that made me want to make music was…
I’ve been singing “poop songs” on the toilet since I was a kid. I listened to a ton of thrash metal, mainstream arena metal, and hardcore/punk as a kid. I’d have to say that Nomeansno’s Wrong was what actually made me pick up the bass guitar.

The record I’ve played more than any other is…
So many ties: Nomeansno’s Wrong, Bolt Thrower’s For Victory/Warmaster, Grinning Plowman’s Days of Deformity, Shiner’s Lula Divinia, Fields of the Nephilim’s Dawnrazor are all about tied. I stopped being a Metallica fan when they turned into a hokey redneck rock band, but I melted my And Justice for All cassette tape by playing it too much (not vinyl).

The record that always make me feel good is…
BOSTON’S Boston. It’s like getting on a goddamn jet ski, I can’t not smile (and laugh) at those stupid lyrics and siccck guitar harmonies. I don’t get into much mainstream rock/dad-rock/classic commercial jingles, but damn this slick slab is infectious.

The record I turn to when I’m feeling down is…
SOD’s cutesy song “Kill Yourself” from the beloved, family-friendly, politically correct, Speak Engrish or Die LP. Always brings a chuckle. Tee hee hee.

The record with my favorite cover art is…
The original cover of Tad’s 8 Way Santa was even more lame than the name of their album title – they got sued and had to recall it, as it was used without permission, a “found picture from a garage sale” ha! I have the cassette still (see picture). Lawnmower Deth’s Oh Crikey, it’s Lawnmower Deth is another gem of a cover.

The strangest LP I own is…
Of the few that I have left, I’d definitely say “The Village People”. I used to put it on when trying trick people into having intercourse. Sensual. Intoxicating. Naked with a hardhat on. Hey hey.

The rarest LP I own is…
Nomeansno’s original pressing of You Kill Me, with the original(alt) and master on Undergrowth Records. It’s a little bit different. RIP, NMN.

Thanks so much for taking the time to hear about the past.

Here is a picture of some of the weird spatterings of my remaining physical media. 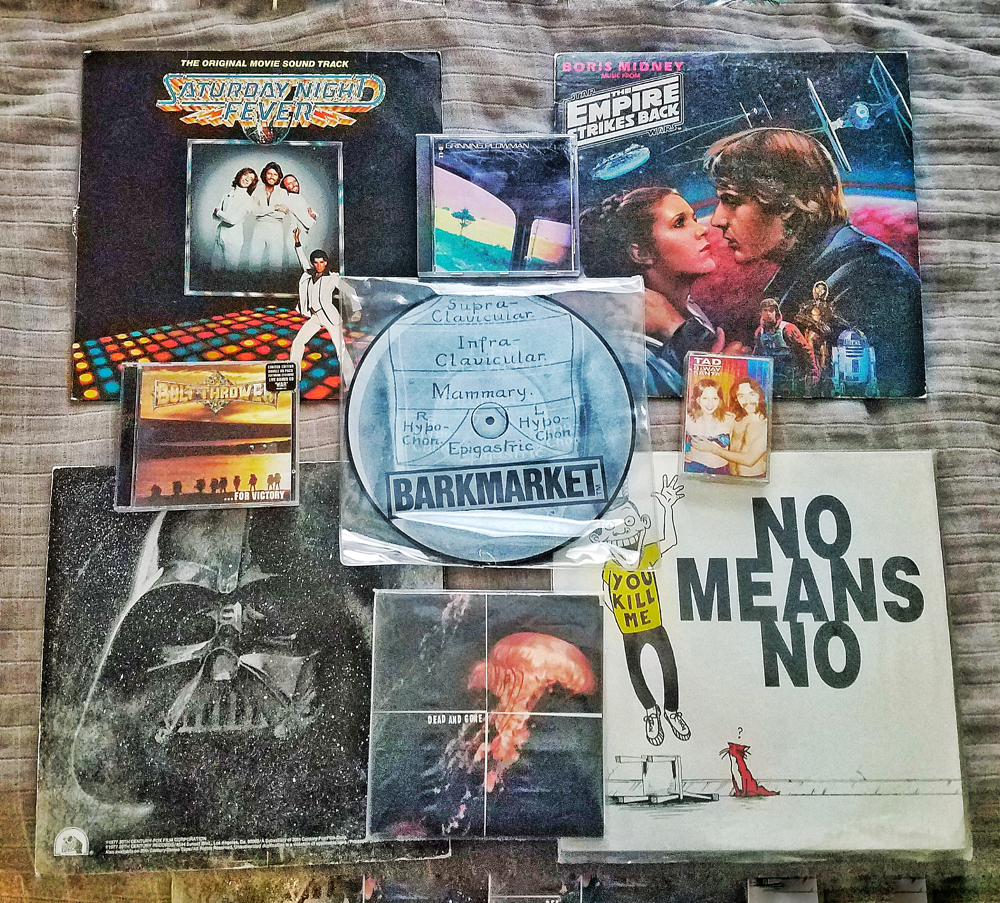 The Empire Strikes Back 12” – I loved that princess person.

Dead and Gone Shiny and Black 2 x 7” – I got that prematurely from them on tour in a blank cardboard sleeve and I had to send off to get the cover art. Worth the wait, LOVE that band. We cover their song “Blood from a Ghost” on the new Dead Register EP.

Saturday Night Fever – I used to have the Sesame Street Fever (parody), and the song TRASH was amazing.

Nomeansno – The first, rare, 1985 Canadian pressing of You Kill Me. Cute picture of a dude hanging himself with, and the artwork inside has a guy shooting up with the words “FUN.” Good times.

Bolt Thrower For Victory Double CD – My mom got this for me in Chicago when I was young and hungry and couldn’t find it in Atlanta. They SMASH. RIP.

TAD 8 Way Santa – They got sued for the cover. Best “Grunge” band. I’d listen to this fat guy howl over some bleach guy whining about nothing, any day.

Grinning Plowman I Play Jupiter – The first CD I bought with my own money after switching from cassettes. Gothasfuck.

I’m glad you enjoyed this, and I can’t wait for you to enjoy Dead Register’s Captive EP and video.

I'm a very tired, black coffee drinking curmudgeon who has been collecting records and cassettes for over forty five years. Listening to metal, 80's alternative and jazz.
View all posts by Ken →